It is my feeling, to put it as succinctly as possible, that the one necessary ingredient in every successful joke is a sudden alteration in point of view.
– Isaac Asimov (The Sense of Humor)

This just in: Local news is bullshit!
[I’ll give you a moment to sit down and catch your breath…]
Ok, to be fair, my perspective is mildly skewed by my collegiate/elitist/pretentious perspective. After all, not everyone knows that the local news, in its current form, is a complete and total time suck developed in the 1970’s to generate a shit ton of advertising dollars for local stations. So much money that the “news was much ‘too important’ to leave to journalists” . Or maybe most people just don’t care.

My grandmother, who built some of the first ever computers at AT&T, knows that the local news is just a lame infomercial for actual information, but she’s not going to change the channel. What else is she going to do with her day? Read a book? Play videogames? Her vision is failing. Join a Meetup group? She barely leaves the house. Watch movies? She doesn’t like most movies, and she’s already watched the Everybody Loves Raymond DVDs we got her 3 times through. Nope, she is hand in hand with the Local News on her quick trip to the rest of her life. :/

So why even bother grabbing such low hanging fruit? Especially in the face of my oh-so sophisticated audience…? Well, first of all, what’s wrong with low hanging fruit?! I didn’t even have to climb or jump. You know who climbs trees for food? Chumps! Secondly, this was more or less a comedic experiment for me.

I assume most/all of you have seen the Sinclair ‘mashup’ by Mr. Timothy Burke [https://theconcourse.deadspin.com/how-americas-largest-local-tv-owner-turned-its-news-anc-1824233490 ]. This is the sort of dramatic revelation that usually leads to comedic ideas. But a comedic idea isn’t the same thing as a joke. So, the question that I’m always asking is how to turn a funny concept into a joke.

I think this a question that many writers have stopped asking altogether. This might also be something that audiences no longer care about: Eg. The Unbreakable Kimmy Schmidt seemed to be quite popular with audiences and critics, and you can literally count on one hand the actual jokes that were written for the entire first season. Don’t get me wrong, there were many funny things throughout the series, but not many actual jokes.

Quick lesson: What is a Joke?

Well, as most *good* comedians can tell you, a joke is ‘setup and punch’ or ‘setup and payoff’. Basically, you present a premise/perspective [“Did you know I can jump higher than a house?…”] and then juxtapose it with a shift in perspective [“Of course. Houses can’t jump at all!”]. Now, as I just mentioned, not every piece of comedy has to be a joke, and obviously not every joke will actually be funny. But producing a funny idea without a joke is like serving someone separate ingredients to a meal: in some cases, like finger foods, Kimmy Schmidt, and sometimes the literal News, it actually works. In other cases, you end up chewing on a dry beef patty watching Fred Armisen literally presenting his concepts for potential jokes to a room full of very polite drummers. Seriously, he told us about his funny ideas, but didn’t bother to write any jokes before he did a Netflix special. Kind of embarrassing.

What really kills me is when the joke is sitting right in front of a writer’s face, and, for some reason, they insist on having their characters indicate through exposition what the funny premise is. I’m not demanding that everyone live up to the cinematic setup-payoff of Edgar Wright , but can we at least remember ‘show don’t tell’?!

So, I thought of a funny idea–”What if the Sinclair hosts were actually robots?”–came up with a sufficient (if obvious and tropey) punch–”The would-be subservient robots turn evil”–and added some funny ideas on top of the joke [sexism, Russia, etc.]. I know it kind of ruins the joke when it’s explained, but, as a skeptic, being a killjoy is also a passion of mine.

After my first joke, I couldn’t resist taking another funny idea and turning it into an actual joke as well. It was such a blatantly obvious joke waiting to happen. Maybe I have OCD, but watching people ignore obvious payoffs to comedic setups makes me want to scream. Especially when their presentation of the funny material immediately kills the potential joke.

For example, imagine this setup:
We have an eccentric, but well spoken host teaching us a lesson. 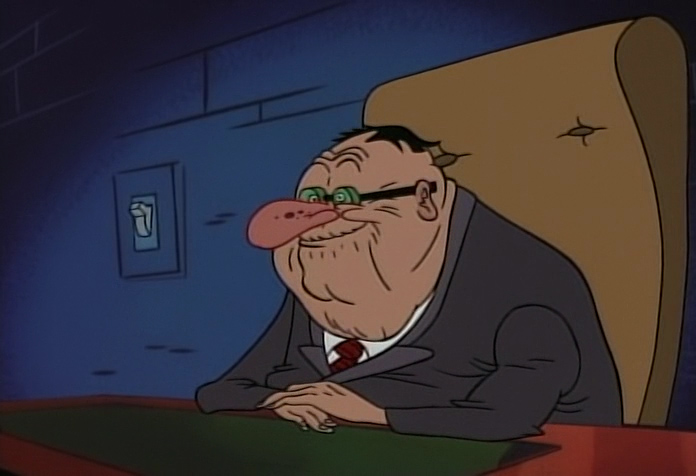 After a couple minutes, we as an audience begin to realize that there is something a bit off about him. 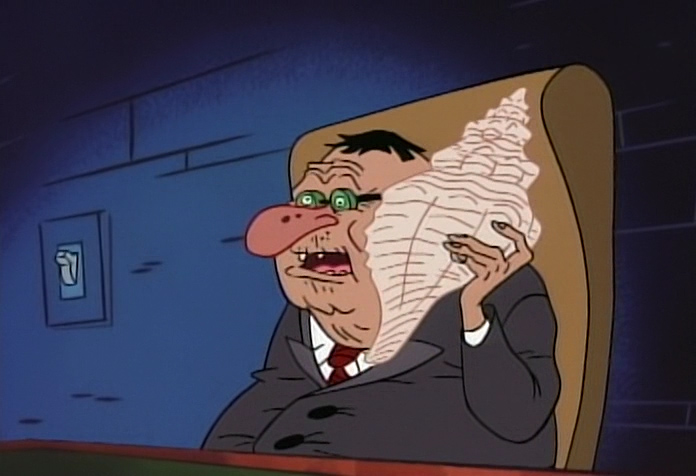 Soon the camera pulls back to show us [the payoff] that he was in an insane asylum the whole time. 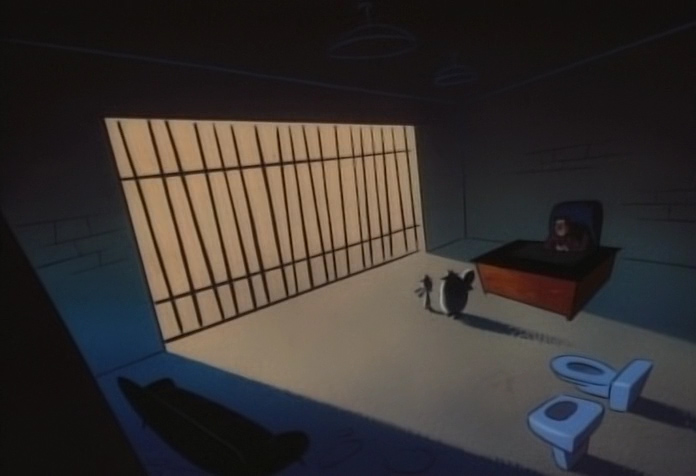 Now imagine that the beginning of this sketch showed a guard place our well spoken host in his asylum, and throughout the sketch our host keeps indicating just how crazy he is. Is it funny? Maybe, but it’s certainly no longer a joke.

Perhaps the idea of a crazy person trying to teach us is funny enough on its own. Perhaps the indicative writing is genuinely humorous. Perhaps the producer even went through the effort of casting a very talented comedic actor. It could definitely work. But why place all the weight of the sketch on your actor’s shoulders and the assumption that the idea is funny enough, when you have a solid joke staring you in the face?

Maybe jokes just aren’t important to some comedy writers… I think I just died a little inside writing that.
If you’re going to ignore jokes, why not just read a laundry list of all your funny ideas periodically? Just screencapture the list and share the JPEG! NOTHING MEANS ANYTHING!!!
[Sorry. Reducing ideas to absurdity is also a favorite trope of skeptics. So is the use of distancing language for that matter.]

Here’s an idea that might be facetious, but also might be very very real: Instead of creating jokes, writing actual comedy, why not become a journalist? Why not write articles/blogs/video essays/lectures/etc. and just periodically sprinkle bits of humor throughout? After all, narrative comedy is hard. Narrative comedy about the news, especially political news, is almost impossible. Just ask the former staff of That’s My Bush, Lil’ Bush, and wait until September to ask Stephen Colbert how much time and money good intentions like Our Cartoon President cost the studio.

Why even bother to fictionalize our current ‘lingering in the chambers of the sea’? Poking fun at reality is easy; like your mum. Look at the actual funny work of Stephen Colbert, and the incomparable Last Week Tonight. Sure, these guys are genuinely brilliant, but there would still be something intrinsically funny about their subject matter.

Many of us have learned over a lifetime to laugh at reality; if you don’t laugh, you’ll cry, right? But now, we’re facing an age when we don’t even need the veneer of a comedic host to put our reality into the narrative packaging of a joke. We barely need the humorous element of a Fox News host being ignorant and/or racist. We can tune into our most educated and ‘woke’ journalist, and laugh our asses off. Reality can be pretty damn funny without any setup or punchline.

After all, I search in the vast universe of frustrated indie filmmakers and producers of comedy, and I can’t cover more than a coffee break worth of time with the actual sketches/parody videos on this very topic, and I’m including my own 3 minutes in that queue. It seems that most creators would rather talk about or report on the matter. It appears that this is good enough to be entertaining for some folks. Maybe it is. Maybe most content creators aren’t interested in writing jokes so long as they can be funny while parroting a list of the facts or presenting a string of funny ideas. After all, what’s the point of writing actual jokes?

Jokes are the narratives of humor, and like it or not, humans are barely human without story. It’s how we make meaning out of our lives and the world around us. It’s how we remember our past, and contemplate our future. It’s everything. [just ask Dr. Randy Olson] Even journalists won’t just tell you the ‘facts’; if they are any good at their job, they’ll tell you stories, and if they are good story tellers, you’ll remember what they had to say.

So, you can definitely make someone laugh without a joke, but if you want your comedy to be memorable or even important, you better make it a joke.

Well, I hope you enjoyed my timely sketch, and compulsive need to create jokes. Thank you for your time,
John Rael